As we make our way in the world, we like to think we know what is what, and that functions are self-evident: Clothes are for wearing, ribbons are for tying, and hula- hoops are made for twirling.

At A La Mode, we are all about defying expectations! Sure, the fabrics we find in our favorite shops throughout Israel and Europe are technically made for clothing, but what happens if we use them as a vibrant candy-table backdrop?  Would Missoni object?

And what might occur if we take those colorful ribbons, normally made for tying knots, and let them, ever so naturally, caress the stems of flowers in a creative table design?

Even that quintessential childhood accessory – the hula hoop – can be covered in leaves and brimming with flowers, and then hung from the ceiling as the most magnificent  floral chandelier.

So to our dear clients, expect the unexpected and dream the unimaginable as we work on our upcoming debut of the most exciting and couture design in the new round of events 2016-2017!

Family affairs are the bread and butter of party styling in Israel, where large, joyous celebrations are woven into the fabric of life.  At À la Mode, we design the classic weddings, bar and bat mitzvahs, and corporate events,  but we also take on lesser known, yet no less joyful events, like simchat bats and, most recently, an upsherin.

The upsherin is a charming life-cycle event celebrating a young Jewish boy’s first haircut. In Israel, it’s often practiced by Sephardic Jews, who call the ceremony by the Arabic name, ḥalāqah, while back in the US, its generally known by the Yiddish word for shearing.  The upsherin is a deeply traditional event, recalling memories of pre-war Europe and childhood innocence. Of course our house-style is mod – even “post-mod.”

What are two design divas to do?

After an intensive brainstorming session, we realized that the best way forward would be to embrace the upsherin‘s old-school appeal. As it was, the party location – a magical rooftop overlooking the Western Wall – could not have been more appropriately traditional . So we decided to go all the way. A real (and impossibly heavy) barber-shop  chair was brought in, we constructed a red and white barber-pole, inviting guests to the salon, while a board presenting a playful “price-list” of the different services available was set up. Above it all was an immense banner that incorporated shears and other tools of the trade. And of course the colors and shapes of the decadent candy table corresponded with the design theme and colors. The guests were thoroughly charmed, no one more so than the the center of the party – the three year old boy, now sporting his first haircut…in high style! 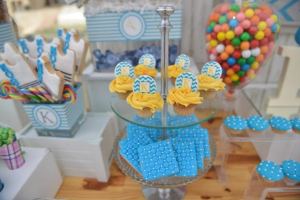 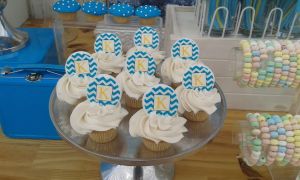 Being couture party stylists means combining confidence and dexterity with flair and creativity. On the one hand, you need to present your clients with a clear, innovative vision of how to design a special event that truly sparkles. Yet, you also need to be flexible enough to work within the ever-challenging confines of time, place, and personal taste. Just the other week, with Pesach fast approaching, we were given the opportunity to style a lavish Bar Mitzvah party. When it came to creating the favors, our clients had a brilliant idea to give out bedikat chametz kits. The challenge, of course, was taking the most traditional of artifacts and magically giving it a fresh, modern spin. If memory serves well, the typical bedikat chametz set distributed back in yeshiva day-school consisted of a shabbat candle, a ratty white feather, some old matches, and a photocopy of the blessings – its edges curled. That definitely wouldn’t work. As we began to plan the favors, we realized that the candle could use a eye-catching accent that fit with the black, white, and gold theme. The matches would need an especially bold and handsome design that brought the look together. We searched for and finally found decadent black feathers to which we added gold whispers. And to wrap it together we worked closely with a printer to produce a stunning cardstock bracha sheet. The results: a total makeover for the bedikat hametz kit. Erev Pesach never looked better! 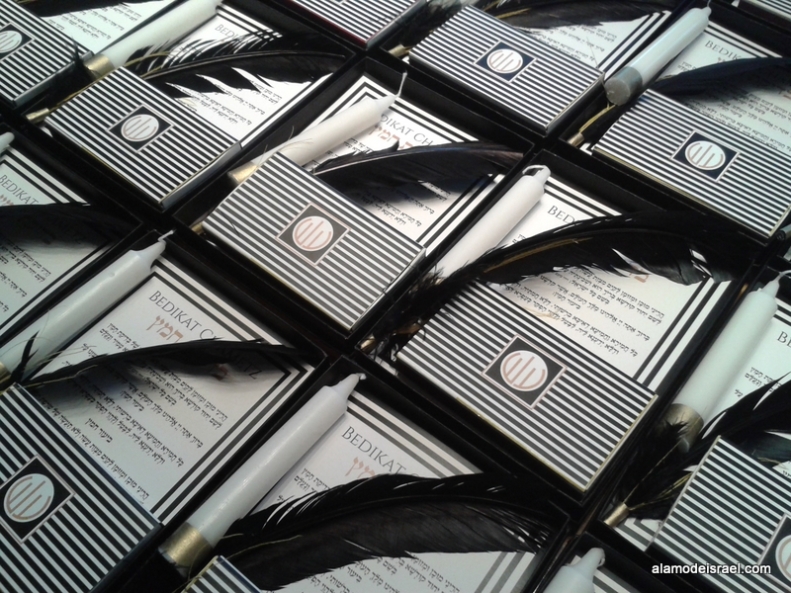 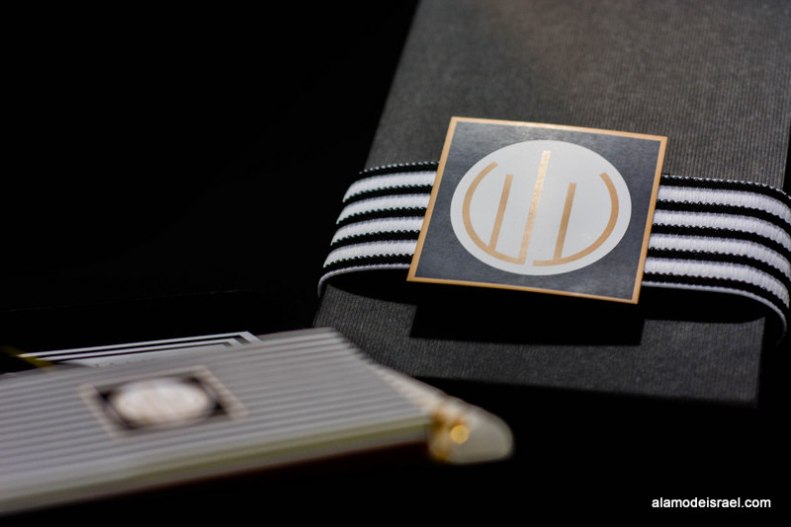 À la Mode means “according to the fashion” in French. That pesky little word “la” acts as if there were a single, exclusive style, which of course there isn’t. To each his own, or as they say in Israel, al ha-tam ve-ha-reyach ayn lehitvakeach – there’s no use arguing taste (and scent!).

It’s true that À la Mode has a house style. We like doing things that are sleek and modern. We are not afraid of colors, but our use of color is very carefully deployed: Brights over pastels; wild tones that explode instead of soft tones that hush.  But we also work in all kinds of styles – we’ve created parties with a more contemporary look, events with a country flair, oriental designs and even a whimsical theater pastiche for a simcha celebrated on Purim. When we’re hired to design parties in new modes, we thrill at the challenge.

Working out of the town of Modi’in, which is equidistant between Tel Aviv and Jerusalem, means that we have bright Mediterranean modern looks to our West and traditional Levantian styles to our East. Much of the time, we do our party shopping in Tel Aviv’s fabric district with its cutting edge designs. Sometimes, we make our way to Jerusalem to its Middle Eastern scents and sights. 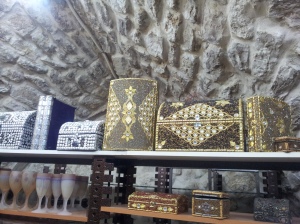 We’re now planning a weekend Bar Mitzvah with a decidedly Middle Eastern look, and so we found our way to the souk in Jerusalem. The place is, as always, packed with spices and trinkets, teapots and tajines – and people from all over the world. While we generally have a specific mission in mind when we go on these purchasing runs, it is usually the serendipitous discovery that lies at the heart of our journey. Our recent trip did not disappoint.  Deep within the market’s alleyways, there are things that glitter and make the heart soar; Preciously decorated boxes and gaudy and decadent chandeliers. Not our style? No such thing. If it’s compelling and gorgeous, then we’ll make it work! 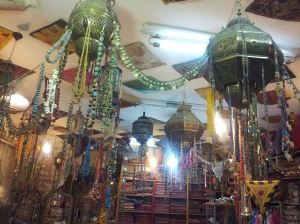 Each day in the life of party-designers brings something new. One day it’s meeting with florists, the next its searching for luxurious table-runners, while the day after you’re turning the town upside-down in search of that perfect party-favor. Last week brought us to the legendary Shuk Levinsky, one of Tel Aviv’s incredible outdoor markets. The mission was small but formidable; spices for besamim packages to conclude an upcoming gala Bar-mitzvah weekend on a sweet note.

When you shop for fresh produce at the market, your eyes do the walking, but spice-shopping needs to be done with your nose. We knew half a block away that we had found what we were looking for – a modest stall with the most heavenly smells. It’s a shame the scents won’t come through your computer-screen.

Here we are, Creating Chanukah Dessert Magic with Joy of Kosher: